Archive for the tag “Cafayate” 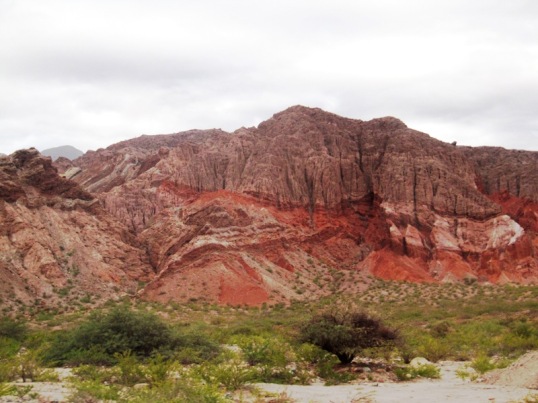 Entering into Cafayate we experienced a drastic change of scenery.  Grass covered hills transitioned to brilliantly red cliffs and cactus filled valleys.  I could not help but be reminded of the drive from Las Vegas to Zion National Park.  The beauty was similar, but exciting and special in its own way. 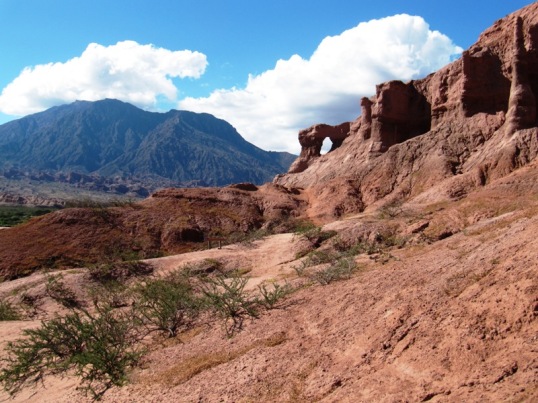 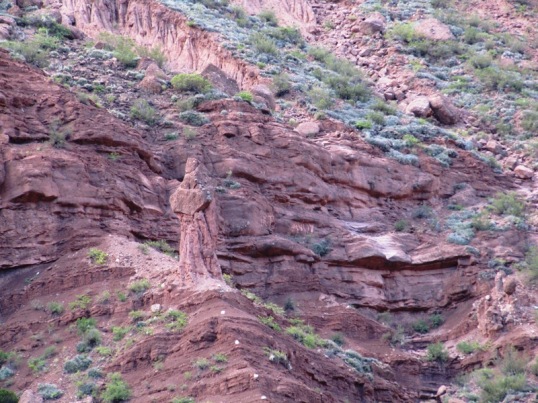 The quebrada (canyon) extends almost 110mi (180km) between Cafayate and Salta.  Every two to three miles and new rock formation emerges from the earth. A series of arches in one area is called las ventanas (the windows).  Another formation resembles a monk in robes and is called fraile (the friar). 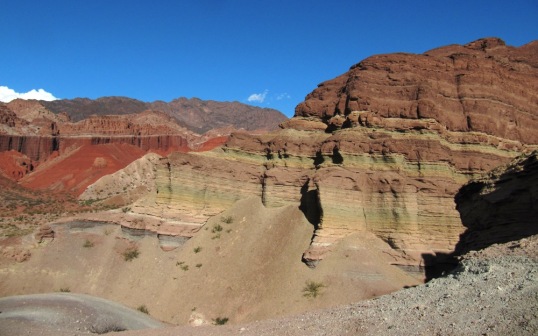 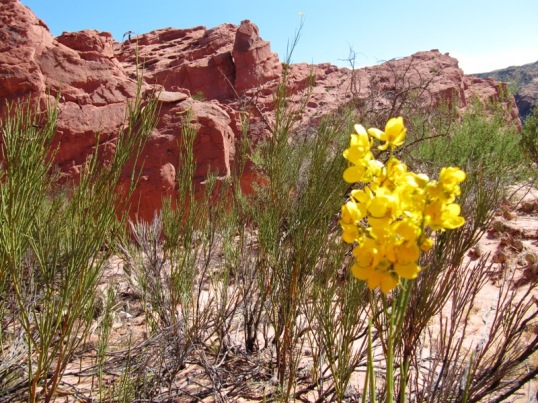 The colors and textures of the rock make a feast for the eyes. Striations of copper, sulfur, iron and zinc create rainbows of layered rock along the cliffs.  The desert is home to many spiny plants and animals.  The canyon has a unique microclimate where it only rains a few days a year even though it rained everyday in January and February in Cafayate. 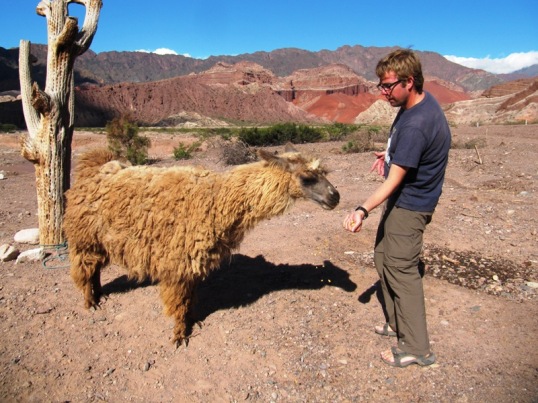 Further on we stopped for drinks and a chance to feed llamas. 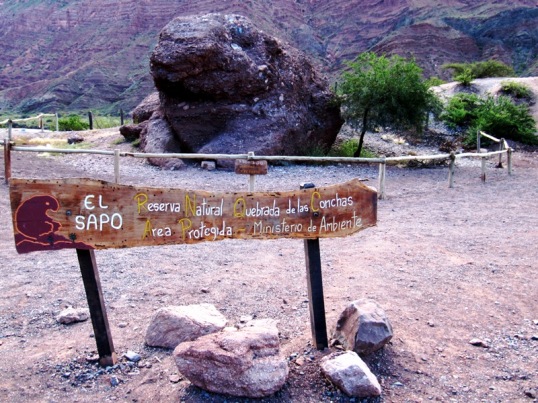 One of my favorite formations was el sapo (the toad). 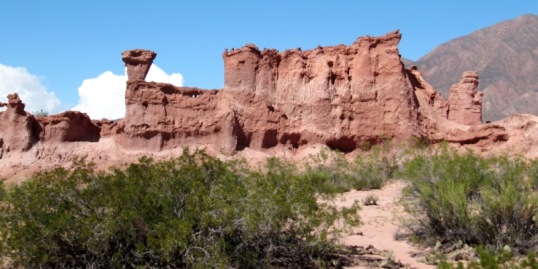 Another formation is perched on a cliff, el locomotivo (the train). 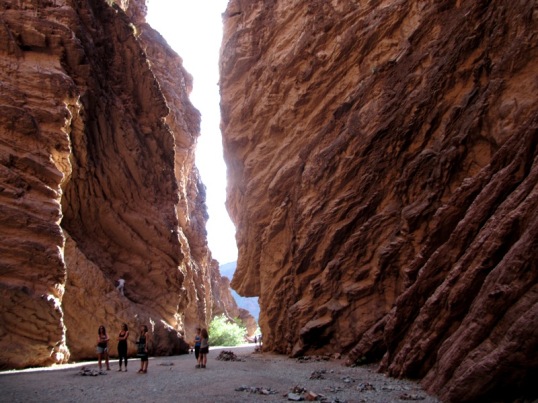 The grand scale of the canyon is not fully felt or realized until we enter el anfiteatro (the amphitheater). Huge rivers flowed down the mountain side and created this 400ft deep bowl at the base of the waterfall. Plate tectonics have now shifted the mountains and diverged the flow of the river so that the rock formation remains dry.  The cliffs are gorgeous, striped with colors and golden in the sun engulfing us as we stood, taking it all in. The name of this formation comes from the high quality of sound retention. 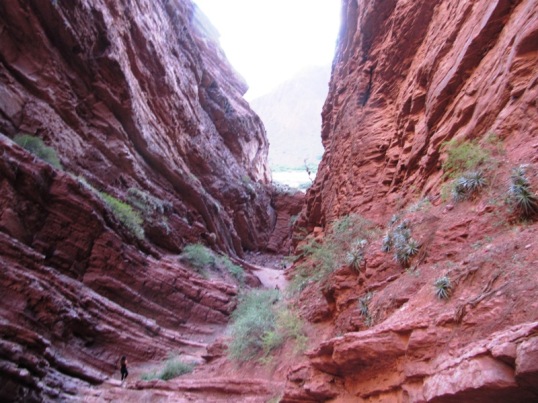 The next major attraction to the quebrada is gargantua del diablo (devil’s throat). I think it’s funny how names are reused. There has been at least five “mountain of seven colors” and Carmen described another gargantua in Iguazú. This formation is enormous!  Its natural origins are similar to the anfiteatro but contain many levels of red rock and contrasted with perfectly green little trees. We had to do quite a bit of scrambling to get to the main bowl but it was well worth it. 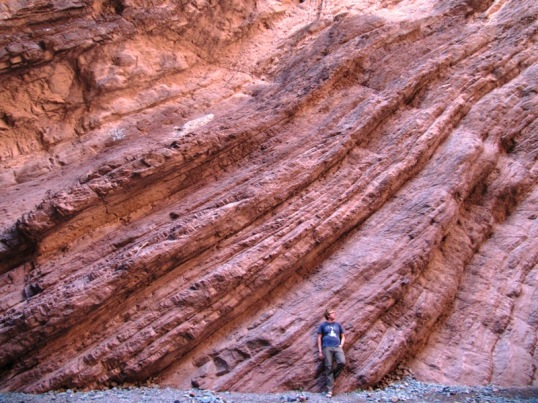 Two weeks ago, we were entering Mendoza and the bus felt so small in its attempt to cross through the Andes.  The highway to Salta has been a different experience of vibrant colors and imaginative land formations. Goodbye to the Grand Canyon of Argentina.

Cafayate enamored us from the beginning. Even on the bus ride into town we were admiring the neat streets and cozy feel of the place.  Like many Argentine towns Cafayate is organized in colonial Spanish grid system with a central square. 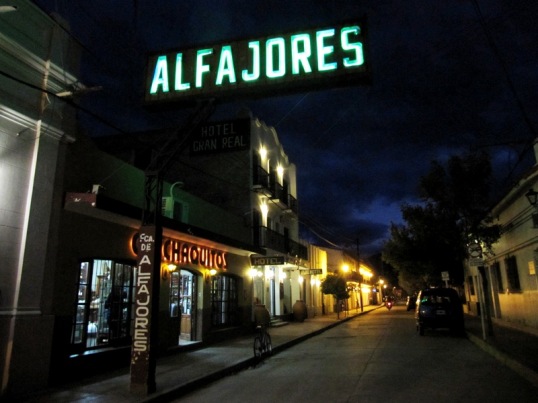 Just off the square was a sweet alfajores factory with traditional flavors such as coconut and chocolate dipped, as well as some unusual ones like lime. 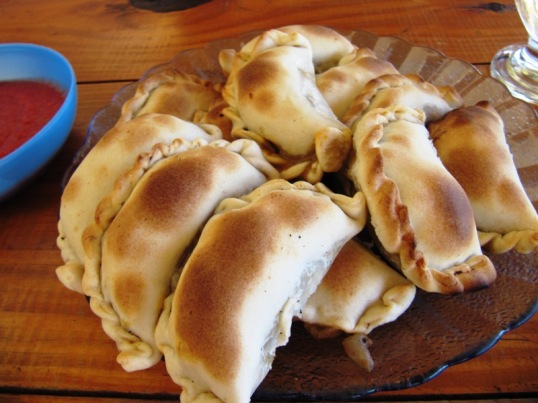 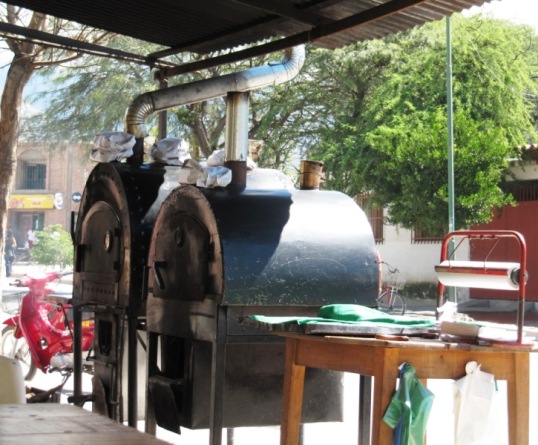 But we could not survive on sweets alone. Across the street from our hostel we were enticed by iron wood-burning ovens puffing smoke.  Inside were trays upon trays of salteñas (empanadas filled with meat, onions, olives and hard-boiled eggs).  We ordered a dozen along with wine and soda water to make a spritzer (very popular in these parts). 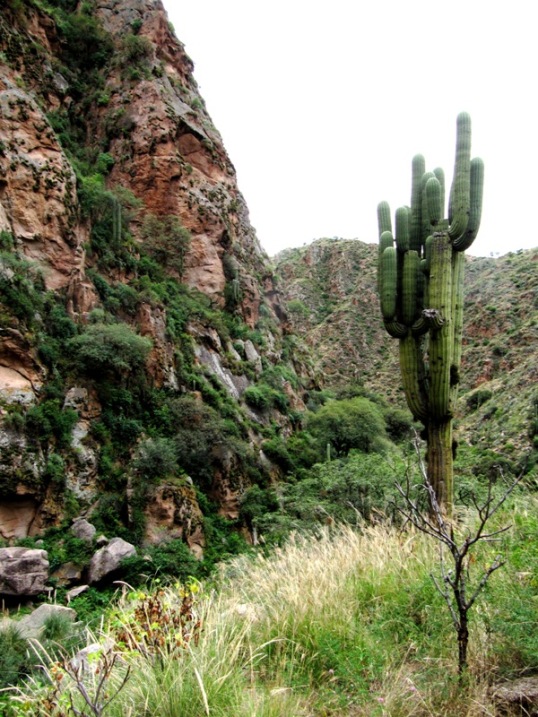 The next day was Sunday, which in small town Argentina means everything shuts down.  So we decided to go on a hike.  Based on the guidebook and information from the hostel we chose a 4 hour trek to a waterfall deep in a canyon.  We were expecting a moderately difficult but fairly straightforward hike. Of course, it didn’t quite work out that way. 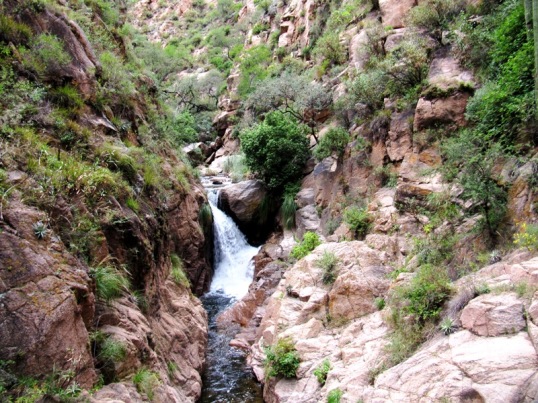 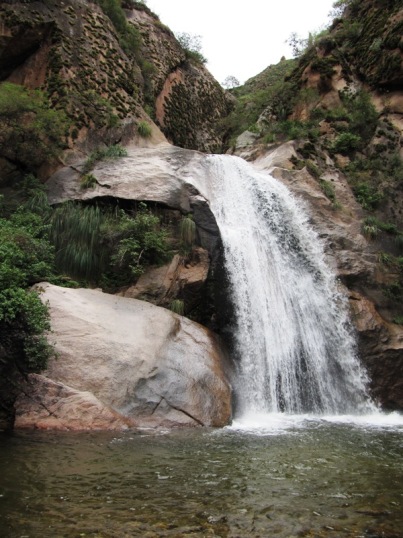 The “trail” was often difficult to find and involved a lot of scrambling up cliffs. The path kept disappearing into the river that carved the canyon.  These were no simple crossings but some of the most difficult I’ve ever encountered.  They stressed me out but Nathan happily skipped from boulder to rock like a pro. (Though he was less happy when I accidently knocked him into the water as he tried to help me cross.  Twice!)  The invisible path, the river crossings, and the lack of any other hikers started to get to me. But with tired muscles and soggy boots we survived the hike, happy to have enjoyed the spectacular scenery.  The waterfall was beautiful, gushing 10 meters into the red rocks below. 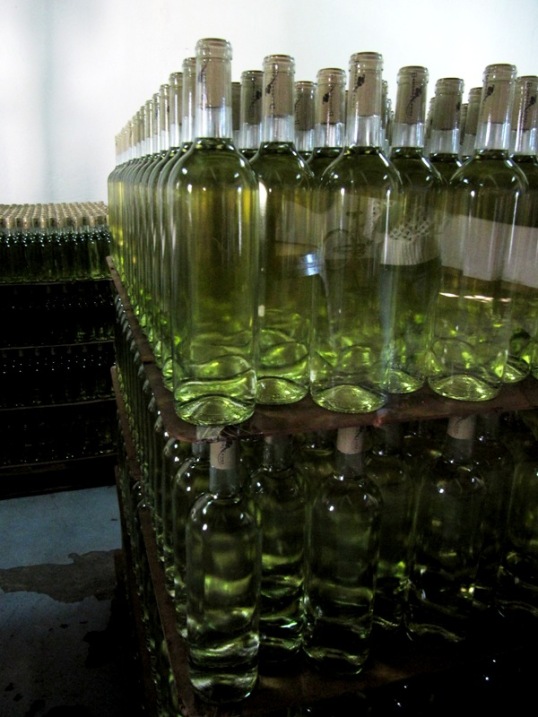 Ok, time for the real reason we went to Cafayate – wine!  We learned in Mendoza that the white torrontés wine was from here.  But all the northern wineries also produced malbecs and cabernet sauvignons that were more tannic than those in the south. Our favorite winery of Cafayate, Nanni, is actually in the town itself.  It produced crisp torrontés that straddled the balance between sweet and dry. 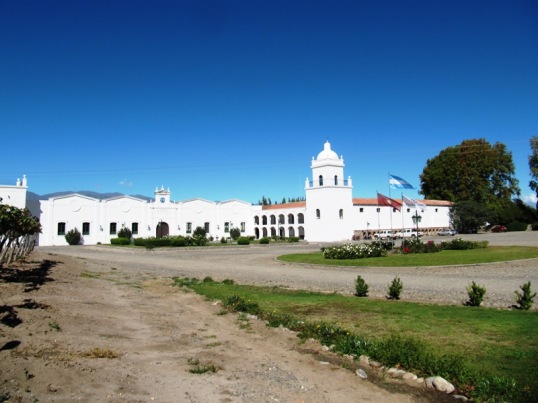 Another great bodega was Esteco.  Beautiful setting, delicious wine, wide selection.  But they lost points for offering wines by the glass instead of a tasting. 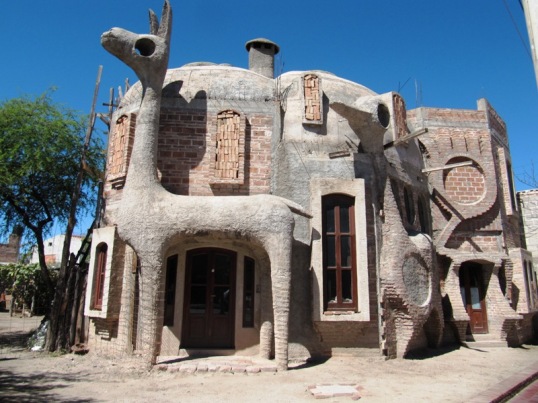 There were many more: Finca Las Nubes for its excellent torrontés, El Transito for its rich cab, Domingo Hermanos for its goat cheese. 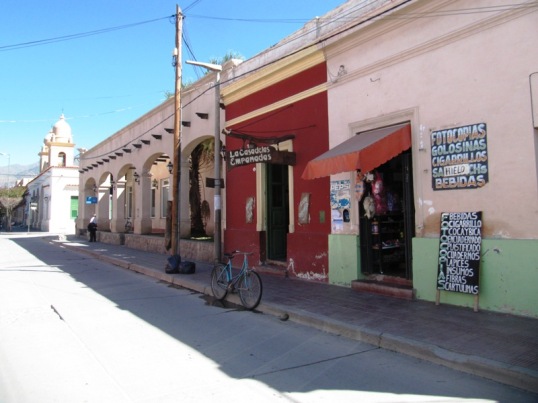 Although we came here primarily to check out the wine scene, we ended up making many new friends.  An Aussie couple we met at a winery, a Swedish pair at an empanada lunch, and an English couple we shared wine and dinner with at the hostel.  Cafayate is just that kind of place.