Much Ado About Machu Picchu – Part 3 (by Nathan)

There is so much hype about Machu Picchu.  Of all the tourist activities to do in South America, this one set of ruins seemed to be on the top of everyone’s list. The archeological site is very accessible with a short tram ride from Aguas Calientes. Carmen and I wanted to expand upon a one day visit to Machu Picchu, and thus we embarked on a six day journey that traversed the hillsides of Peru covering a distance of over sixty miles and four high altitude passes two of which exceeded 14,000ft.  Our lungs and our minds were functioning at top shape after five weeks of traveling through the highlands of Bolivia and Peru.  We were ready to see the famous, the majestic, and the spectacular Machu Picchu.

Our first glimpse of the ruins was from the sun gate atop a saddle of the east mountain range.  The first five days of the trek were challenging, but included luscious scenery and multiple historic ruins.  On the sixth day we woke up in the depth of the night to begin our hike to the sun gate.  Four of our friends from San Francisco joined us on this trek and with bounding skips and strides we hiked the last stone steps in the dawn light.

The sun gate was a magical place for the Incas.  On the winter solstice the sun shines through the stone pillars at sunrise and casts light through the aligned window in the sun temple.  This would cause for a celebration because this day marked the shortest day of the year and that the sun would continue return bringing summer and harvests in the coming year. 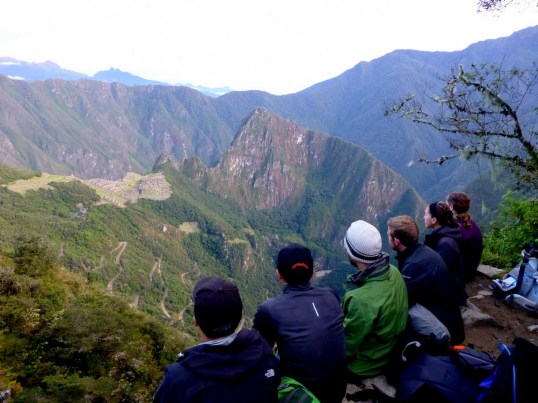 We finally made it to Machu Picchu!We sat on the sun gate wall with our legs dangling over the cliff edge completely awestruck over the beauty of this city.  When the Spanish arrived to Peru they went to work destroying the biggest South American empire, the Incas.  Once a city was conquered, the Spanish would force the people to disassemble their most sacred temples and buildings. Then the Spanish would build cathedrals and monasteries on top of the ruins.  We saw this all over Cusco where a very standard looking catholic church sat on beautifully carved Incan masonry walls.  At other ruins only the biggest unmovable stones remained from the temples that once stood so prominently.  With great fortune  Machu Picchu survived!

The city of Machu Picchu is perched in the saddle between two mountains.  The sacred river wraps around these mountains creating steep cliffs all around.  Machu Picchu is extremely well disguised; The city cannot be seen from the river below or any of the trails that traveled the hillsides.  The people never disclosed the location to the Spanish, and thus the whole city remained in tact for five hundred of years.  Several Peruvian families lived in the city into the early 1900’s.  The city became internationally recognized when Hiram Bringham made his formal discovery in 1911.

Since this discovery this archeological site has been the most intact set of Incan ruins and the best representation of how the Incas lived and survived.  The Incas were a resourceful civilization that utilized the knowledge of all the tribes they conquered.  They built for earthquakes and carved grooves into the stones to lock them together. Enormous corner stones rock with the building and support it during shaking. 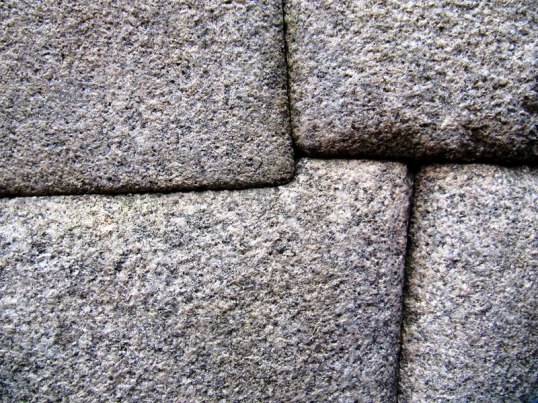 The masonry was by far the most magical and seemingly impossible aspect of Incan building construction.  The stones of Incan buildings and walls were precision cut with stone tools. Individual blocks were cut from boulders using a technique of filling small hammered holes with wood pegs.  The pegs were soaked in water and as they swelled the blocks were cut from the granite.  Final finishing of the blocks was done with stone hammers.

The finest precision cut blocks were saved for the most important structures. In Machu Picchu the sun temple is built from the highest quality stone work.  Huge boulders carefully fit together without mortar and the joints are so tight that not even a piece of paper can fit. 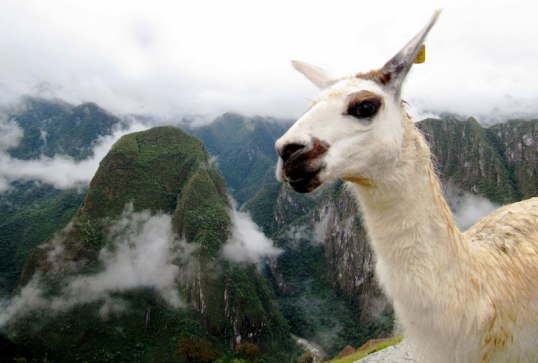 Llama passings on a terrace

We enjoyed wondering around the complex.  There were hundreds of buildings, each room, wall or terrace held a special charm that I experienced nowhere else in South America.  Llamas shufffled around us on the ancient stone steps and green forested moutains soured in every direction.

At the far end of the city the only place to go was up. We bought an additional permit to climb Huayna Picchu, which is the famous mountain peak behind every Machu Picchu photo.  The pathway was steep, but the clouds began to gloom overhead.  In a rush of weather changes our clear sky transitions to a rumbling thick cloud plump with water that began dumping on us during our climb.  Quickly our enjoyable climb became a slippery, uncomfortable scramble up the hillside.  Carmen and I hugged at the rock outcropping that perched on the summit.  Unfortunately the rain and the wind came at us from all directions and immediately we were thankful that we had those few hours in the morning to roam around the city.  Soggy and wet, we climbed down the steps and walked back into Machu Picchu. 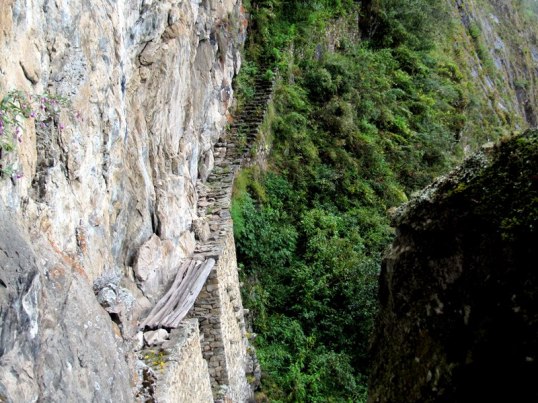 Incan bridge clinging to the cliff

Just as sudden as the rain came, it stopped.  We continued to stroll our way through the city.  Brenda and I decided to go on a little side hike to a place that hung carefully on the cliffs.  On the backside of Machu Picchu mountain the residents carved a trail on the cliff side of the mountain.  The cliffs fall thousands of feet to the Sacred River.  One of the most spectacular constructions on this cliff was the Incan Bridge that carefully placed wood logs over precarious block walls.  The bridge is small, but strategically placed to protect Machu Picchu from all directions

Our six day trek had finally come to an end.  Alongside our friends we conquered the mountains in a way that the Spanish never could, we made it to Machu Picchu.  The city imprinted beautiful memories into our minds.  During the train ride home I had that phantom feeling that I was still hiking, still exploring the mountains of Peru and still laughing and joking with my friends.  In Cusco our group separated, but none of us would forget the epic hike of a lifetime.