My first view of Istanbul was at dawn through the bleary eyes. We had just taken an overnight bus from central Turkey. Sometimes buses are overheated, sometimes they are freezing cold. This one happened to be both, with the heater on full blast at the feet and the air conditioning blowing from above. All night I wished I could perform some advanced yoga moves to help me find the perfect temperature balance. I imagine this would involve one foot sticking straight up while the other is crossed behind my head. I tried but alas I’m not that flexible.

Upon arrival, the sights and sounds of the city were enough to give me a pick me up on the way to the hostel. I had been looking forward to Istanbul for a while so we wasted no time in getting to the old town. First stop: Hagia Sophia. 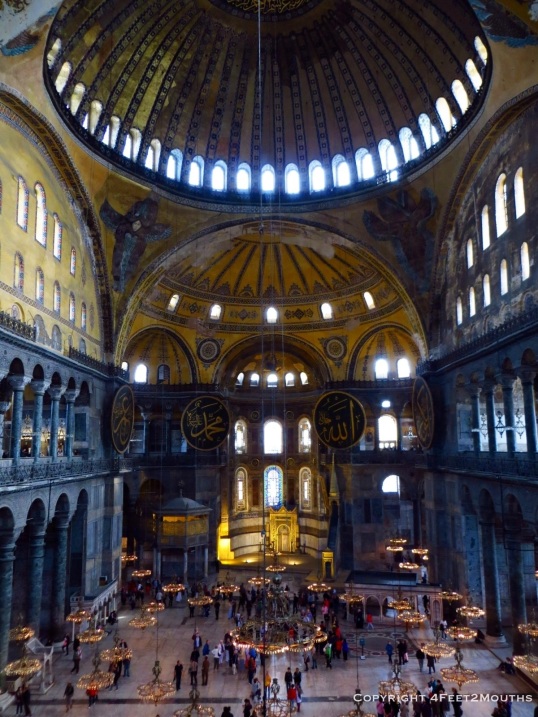 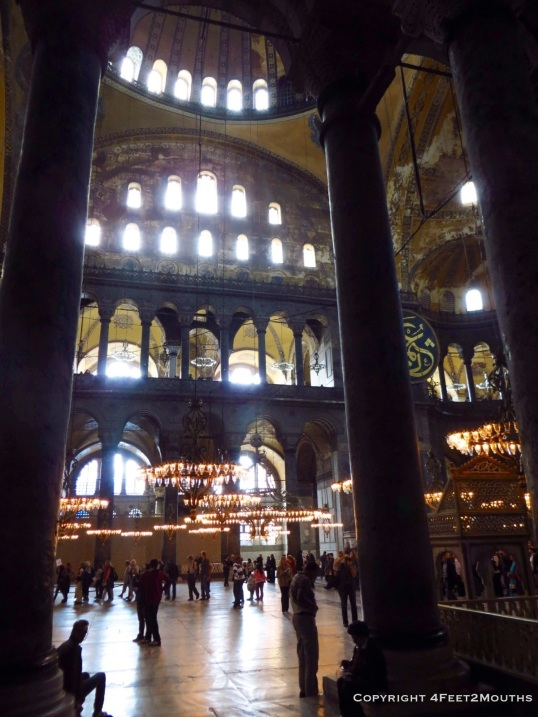 View of Hagia Sophia from the side nave

The Hagia Sophia was one of the most magnificent buildings I have ever seen in my life. Stunning. Jaw dropping. And it was built in the 500s(!!!) by the Roman emperor Justinian. I am so happy that this incredible piece of architecture survived the past 1500 years intact. In order to do so it had to change with the times. For its first 1000 years it was a Christian church. But when the Ottomans came they brought Islam with them. The building was converted to a mosque. The most notable additions were large chandeliers hanging from the ceilings, huge disks with Arabic calligraphy and a mihrab showing the direction of Mecca. 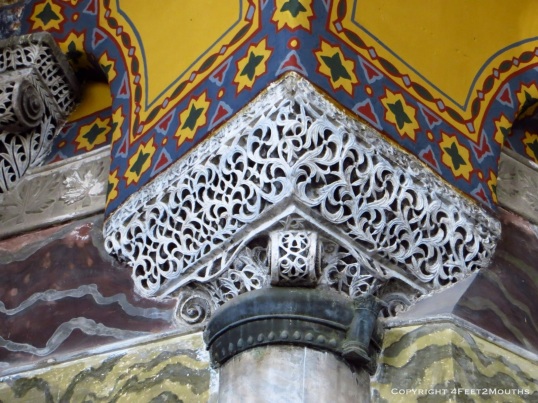 Fortunately, the conversion to a mosque did not demolish the Christian art already in place. Gold mosaics of Jesus, Mary and saints are still present. Other original details such as the marble column capitals engraved with Justinian’s crest are also there. In the early 20th century the Hagia Sophia was converted into a museum to earn money for preservation efforts.

Blue Mosque from the courtyard 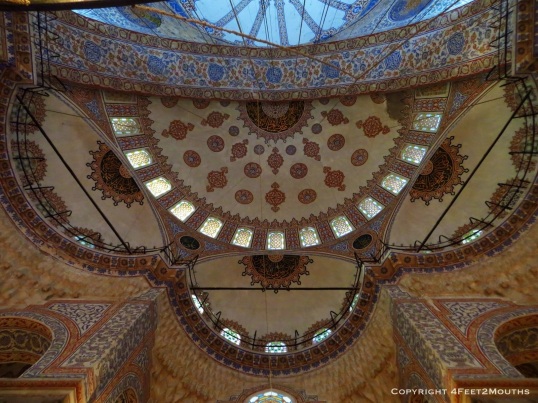 Inside the Blue Mosque

Supposedly, Sultan Ahmet I wanted to outdo the Hagia Sophia. Thus, the Blue Mosque was created very close to it. Overall, he succeeded with the exterior which has a harmonious symmetry. The inside is also grand but not quite as impressive as its much older neighbor. 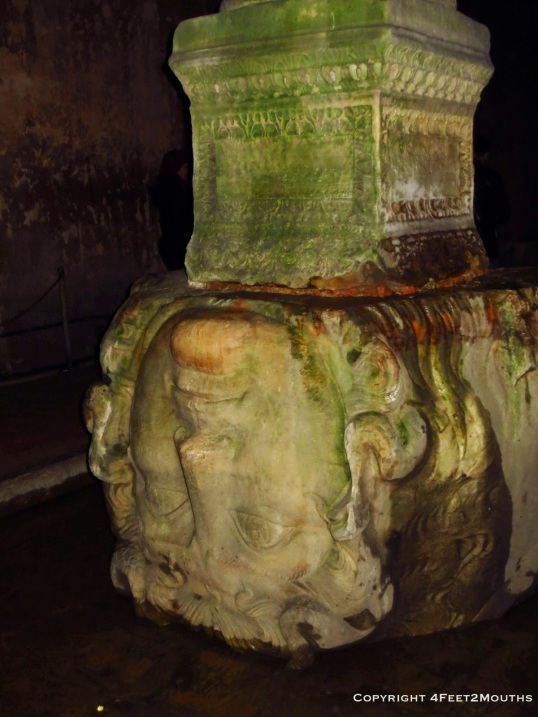 Just across the street was a special surprise, the roman cistern. At first I thought, “what is going to be so special about a big water storage basin?” But as I descended the stairs to go below street level I realized it was much more. Columns taken from other already ruined temples were used for this utilitarian space meant simply to hold water. That’s how a giant Medusa head ended up as a simple column base. But they put her upside down just to make sure she couldn’t cast her deadly stare.

Turkish flag outside the Grand Bazaar

Another highlight of Istanbul is the Grand Bazaar. It is a 600 year old labyrinth of food and market stalls selling carpets, trinkets, jewelry, clothes, textiles, pottery and pretty much everything you could want. Nathan and I were extremely excited to explore every last nook and cranny. But we didn’t get to see any of it. We had been told that the October 25 was an important Muslim holiday. It is the day that Abraham was to demonstrate his devotion to God by sacrificing his own son. However, God allowed him to sacrifice a goat. However, no one mentioned that everyone would also be off the for the four days following the holiday. Therefore, many of the shops, eateries and the entire Grand Bazaar were closed for basically our entire stay. Now we have a reason to return.

Best baklava ever at Karaköy Güllüoğlu

So how does one drown their sorrows in a city that has high alcohol tax to discourage drinking? Eat more baklava. We sampled from several baklava shops. The first was Hafız Mustafa Şekerlemeleri in the old city. We couldn’t resist the trays of baklava variations backed up by mounds of Turkish delight. I happily bought a box to go for a midnight snack at our hotel. It was delicious, but not quite as delicious as Karaköy Güllüoğlu. This place, across the river in the Beyoğlu neighborhood makes magic. The walnuts and pistachios were freshly roasted and dripping in a persimmon simple syrup.

The baklava made me feel better. And truth be told not everything was closed. For example, we still made it to the spice bazaar. Yes, it’s touristy but the piles of spices, teas and sweets housed in a 400 year old market building are still fun. However, the real action was on İstiklal, a major shopping thoroughfare that is largely pedestrianized. Thousands of people could be found strolling up and down from midday to late night.

Fortunately the ferry cruises were still running so we caught one to take a ride up the Bosporus. We followed up with a balık ekmek (fish sandwich) near the dock. Crispy fish is fried up on small boats, stuffed in some bread with onions and handed over for 5 Turkish lira, about $2.50. It’s up to you to douse it with as much lemon sauce as you want. We bought some cucumbers pickled in turnip juice to accompany our quayside meal.

The fish sandwich whet our appetite for more street food. For ideas we turned to Anthony Bourdain. His trip to Istanbul included a late night snack at Kizilkayalar to eat their famous wet burger. We followed suit and found a crowd huddled around the “burger hammam”. Hammams are the Ottoman era public baths/spas. The name burger hammam makes me smile thinking of burgers wrapped in white towels lounging in a sauna. Perhaps they didn’t have towels but they were definitely steaming in their street side case. The burgers were warm and fluffy with a tomato based sauce. Seriously worth the 2 lira. 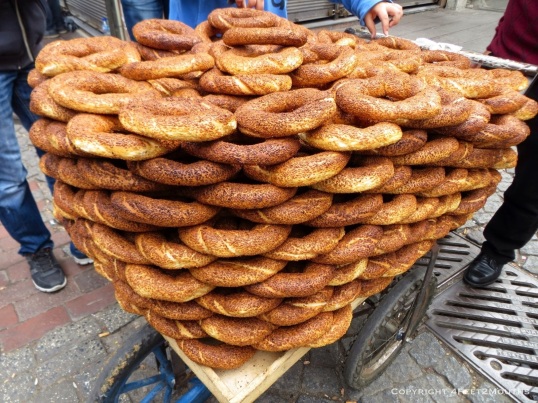 Other popular street food snacks were roasted chestnuts, corn, steamed mussels and popcorn. But when we wanted something to nibble we most often reached for simit, a toasted, sesame crusted bread ring. Dürüm, a simple Turkish wrap of barbecued meats filled our late night cravings. Especially the fine example at Dürümzade. 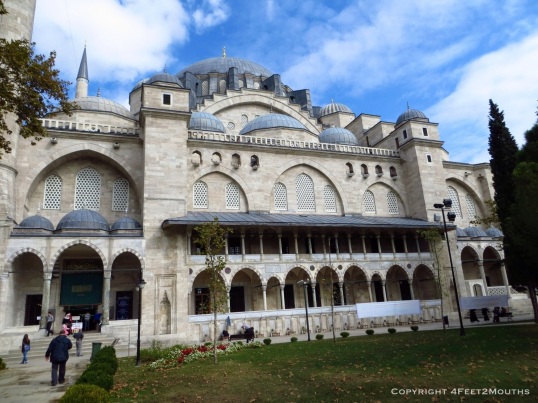 Süleymaniye mosque near the university 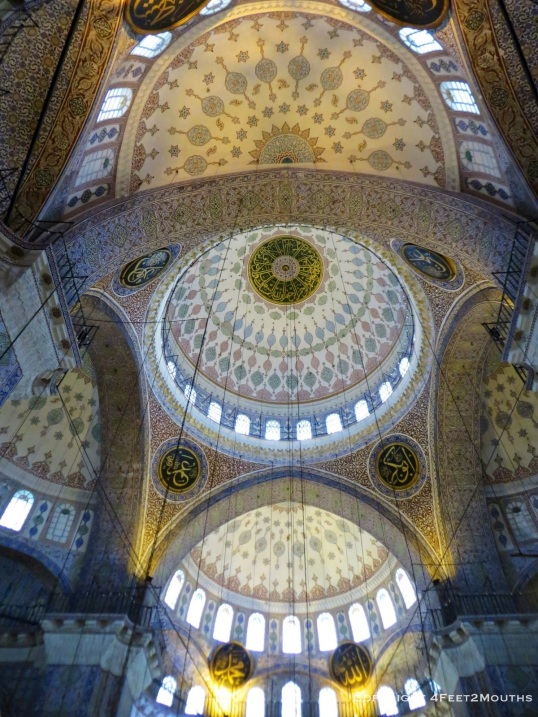 Despite the holidays, the mosques were still open to visitors. High up on a hill we explored the Süleymaniye mosque. A little younger than the Blue Mosque, it was just as grand and elegant. 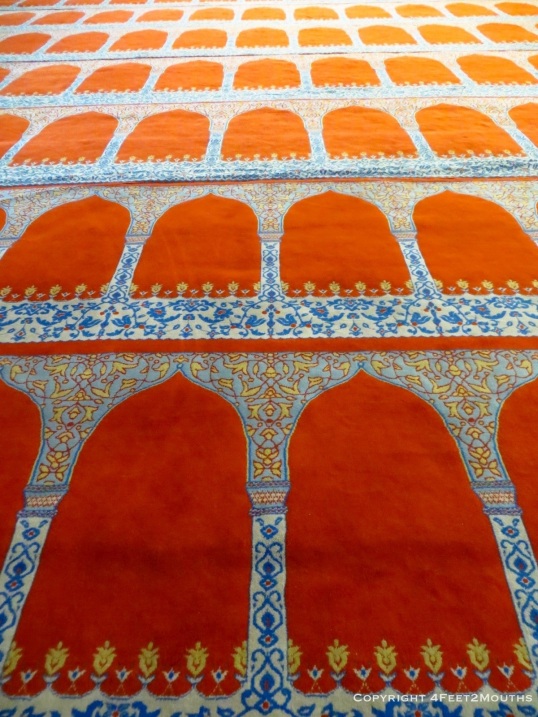 Carpet within the mosque with prayer spaces 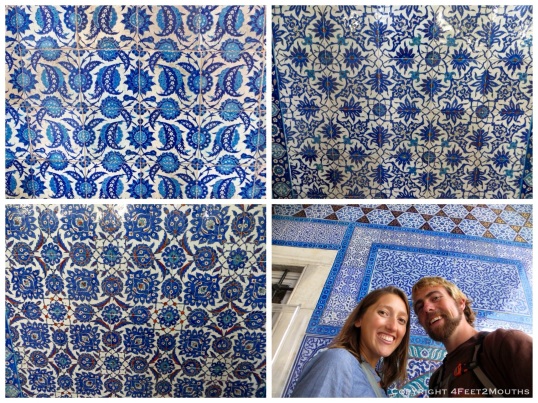 Inside the mosque, the carpet clearly delineates where people should kneel to pray. The same is true at nearby Rüstem Paşa Mosque which was much smaller but adorned with intricate tile work.

Nathan at the lavish Topkapı Palace

There was one more major sight on our list, Topkapı Palace. This huge complex is the Ottoman version of the Forbidden City. Access to the lavish courtyards was once confined to the royal family and their closest advisers. Now, tourists explore the grounds oohing and ahhing at the spectacular tile work and gold leafing. The greatest crowd reaction is probably in the treasure room where you can find enormous and dazzling emeralds, rubies and diamonds encrusting everything from cups to daggers.

During our stay in Istanbul Nathan and I celebrated a very special holiday of our own, our anniversary. We hoped to find a romantic but laid back place that served delicious food. Fortunately we succeeded on all fronts after scrolling through recommendations on the excellent food blog, Istanbul Eats. Our dinner at Datli Maya featured an incredibly moist kebab baked in a clay dish. We ordered a side of roasted eggplant dip and a couple of lahmacun (crispy, thin flatbreads with toppings). Most of our meal had been baked in the large wood fired oven that dominates the ground floor. It was comfort cooking taken a step further by a chef that knows how to add a special touch. We enjoyed our meal so much we decided to have breakfast there as well. A buffet of crunchy cucumbers, fresh tomatoes, three types of cheese, jams, butter, sesame sauce and fruit salad was spread out in front of us. Of course, this was accompanied by a mix of freshly baked sweet and savory breads. 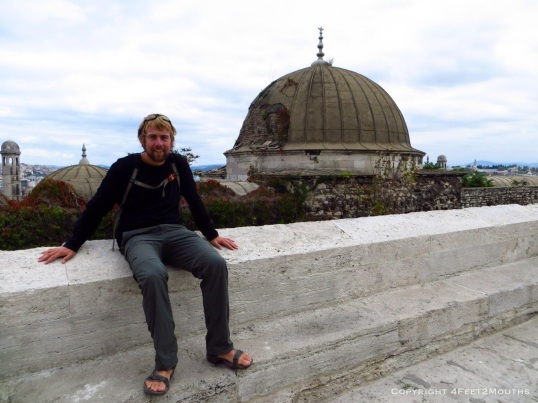 I had a feeling I’d like Istanbul. But as it turned out, I loved it. The city commands your senses – your eyes are drawn to beautiful domes, your nose fills with the aroma of spices, and your taste buds can’t get enough sweets. The architecture, food and culture are a beautiful mix of European and Asian influences. Indeed, Istanbul is a true Turkish delight.

20 thoughts on “Eurasian Istanbul (by Carmen)”