Eating Like a Local In Phnom Penh (by Nathan)

Nothing demonstrates local culture more than the food people eat.  Yes, there is dance, language and tradition, but the day-to-day survival of humans depends on the consumption of local cuisine.  The food of a region shows the struggle and the progress of the people.  So when our bus stopped at a roadside stand and every Cambodian huddled around one stall I decided to get whatever the woman was selling. It turns out she was selling crickets, freshly fried and crispy crickets.  I watched as little girls shared giggles of delight with their grandmas.  My turn came and I was suddenly confronted with a choice: sesame seed or green onion and diced chilies.  I sampled each with everyone staring and I ordered the spicier one.  Imagine the best barbecue potato chip you have ever had, I’m talking caramelized onion, sweet potatoes; these were better!  Excuse me, a leg just got caught in my teeth. 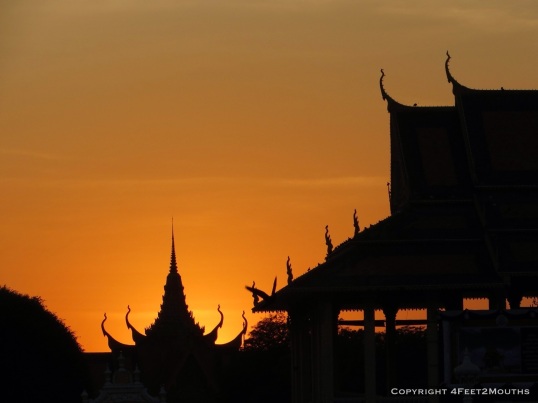 Our bus bounced along and the rice fields disappeared with the growth of a denser city and crowded streets.  We arrived in Phnom Penh, we checked into our hotel and started walking.  There is a nice and peaceful riverside sidewalk that is wonderful for sunset walks.  We passed by the elaborate palace with its spectacular silhouette.  We ended the night with a rooftop cocktail, a great start to a new city. 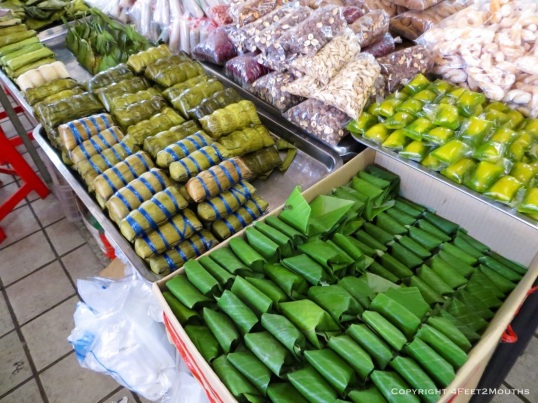 I think my favorite part of every city is the market.  Every village or metropolis has some way for farmers, butchers and cooks to sell their life’s work.  Our first destination was Phsar Thmei, the central market.  After some confused meandering through stall after stall of clothing, watches, beauty products and mobile phones we finally found the hawker center.  We sat down at two stools and two heaping steamy bowls were placed in front of us.  We then mimed our way into getting extra limes and some iced tea.  It was a breakfast for travel champions.  Our savory soup lady shared her stall with a sweet soup lady.  We ordered some rice, mung beans and red beans doused with coconut and condensed milks.  Another woman was wrapping sweet fillings with sticky rice and banana leaves.  Too full, we ordered some to snack on later.

The National Museum of Cambodia has beautiful traditional architecture surrounding  a well-kept garden.  The artifacts are mostly from Angkor temples and show a subtle progression of Buddha statues over time.  The brief video that recreated ancient Angkor was excellent, but the explanations of the rest of the museum was rather poor.  We really wanted to visit the palace, but the gates were locked shut as the country mourns the death (from old age) of their leader.

Cambodia has had a tumultuous and horrendous history.  When they finally gained independence from France in the 1950’s the country was still led my a monarchy.  This lasted until 1970 when a coup overthrew the king, but set off a civil war across the country.  A handful of Paris educated men were excited for communism and they created the Khmer Rouge.  They took control with promises of equality and better living for all.  The Khmer rouge insisted that the country cease all outside influence and return to agrarian means of living.  Thousands were forced to leave the cities and the educated were decimated.

One of the more sad experiences of this entire trip was that we visited Toul Sleng, a former school tuned into the S-21 concentration camp and the gateway for over 15,000 murders.  The barbed wire, tiny cells, torturing devices and meticulous photo documentation are all in tact and graphically showing one of the low points in human existence.  It was the North Vietnamese that eventually stopped this monstrosity.  These were the same Vietnamese that the U.S. was fighting.  And since the enemies of our enemies are…um…friends, the Khmer Rouge went into hiding with their warfare being supplied and funded by the U.S.  Millions of American mines were placed into Cambodian soil.  Two million mines still exist in Cambodia, they are armed and sensitive to the unlucky farmer, kid or animal that stumbles upon one.  There is some amazing and brave work being done out there to identify and disarm these minefields.  I encourage any visitor to Cambodia to visit the mining museum in Siem Reap and S-21 in Phnom Penh to gain perspective on modern warfare.

It is not surprising that after all this turmoil, that Cambodian cuisine remains quite simple compared to their neighbors.  The extremism of the Khmer Rouge appears to have had had an affect of diluting and censoring the food as well.  The flavors of Cambodian cuisine are rustic with a focus on fresh, and sometimes raw vegetables with a nuance of influence from Vietnam, Thailand and China.  We went to the Russian Market for another, but different noodle breakfast.  This market was less organized under rickety wood construction with mounds of vegetables next to cleavers slamming down through bone and flesh of fresh meat.  The market was hot and hazy with humidity; we hovered over our noodles and we were already sweating at 9am.

We attempted to stay cool with some 50cent draft beers, but the heat was persistent.  We ventured back onto the streets in search of the night market.  We found twenty stalls selling the same barbecued and fried skewers.  Why don’t they diversify? We sat cross-legged on a central mat with some bitter melon, chicken, short-ribs and sugar cane juice.  Although tempted, we did not try the “angry bird” meat skewers.  For dessert Carmen had banana and coconut pudding and I had shaved ice over various jellies and egg yolk dumplings with condensed milk over the top.

Our final morning in Phnom Penh was rushed as we embarked on a bus to Vietnam.  With five minutes to spare, we squeezed between the tuk tuk drivers and sat on the tiny stool that rested a mere eight inches above the ground.  We ordered the only thing she was serving- a plate of rice with some dried and re-grilled pork and a fried egg.  A couple spoonfuls of diced chillies and they all smiled at us in astonishment.  We are getting used to this whole eating like a local thing.