Finding Peace and Cold in Zhongdian (by Carmen)

Monastery through the prayer flags

“Brrr, it’s cold up there.” This was everyone’s reaction when we mentioned we were going to Zhongdian. The town, in the northern reaches of Yunnan, is pretty much as close to Tibet as it gets without going there. It was just so tantalizingly close to Tiger Leaping Gorge that we couldn’t resist. So we hopped on a minibus headed north. 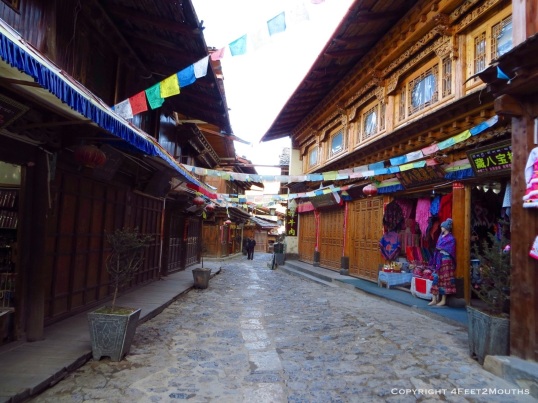 We got dropped off in “old town”, which I have to use quotes for. The old town is actually completely new, built by the government to attract some of the tourists away from old town in Lijiang. It is cute and old feeling for the most part, with crooked streets and wooden Tibetan style buildings. It was rather dead in the winter but I could imagine a lively place in the summer.

However, the government didn’t stop there. The tourism agency has gone on to say that Zhongdian is the legendary site of Shangrila, the magical utopia of James Hilton’s novels. Hilton used pictures of southwest China for inspiration of his work but really, it was a metaphorical place. The government officially changed the name to Shangrila anyway. I don’t know, I just like Zhongdian better. 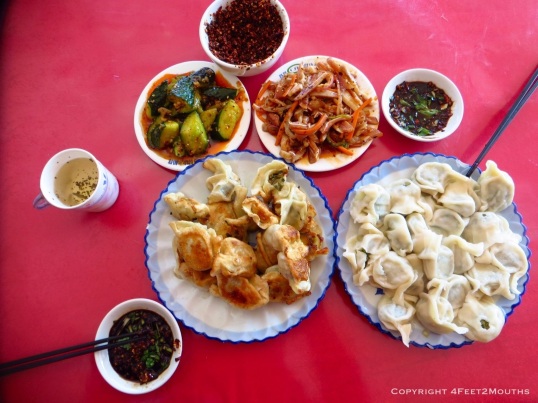 We ventured out of old town for lunch the next day, determined to find something a bit more local. When I saw the sign for the dumpling restaurant I became excited and we entered through the steamy door.  I thought, “We are in southwest china, why are we eating northwestern cuisine?” But it turned out to be the best choice ever. We got a plate of fried dumplings and a plate of boiled ones. A side dish of slivered pig ears and some spicy cucumber chunks and we were set. Oh was it good. Perfect pork filling, wonderful sour, salty, spicy dipping sauce. Yum. We had stumbled on a treasure that the whole town seemed to know about. As the lunch hour progressed, customers from all walks of life streamed in. Even people in traditional outfits. The desire for good food was our common bond.

After our lunch we walked along the main boulevard of town which was lined with vendors. Two popular items were prayer flags and yak’s milk cheese, both at a fraction of the prices they charge in “old town.”

The main attraction of Zhongdian is a few kilometers north of the center. The Ganden Sumtseling Gompa is a 300 year old Tibetan Buddhist monastery set in a beautiful windswept valley. We almost didn’t go. The ticket price was almost double what we expected and after all the high price tickets in the other towns we had visited we had had enough. It is hard to see where the money for these tickets is going. But we paid up and our first views of the monastery instantly made us feel better. We approached by walking clockwise around a lake, past a stupa with many prayer flags fluttering in the wind. Moving clockwise was an important requirement for the monastery, within the compound as well as in individual rooms, as this is the direction one would spin a prayer wheel. 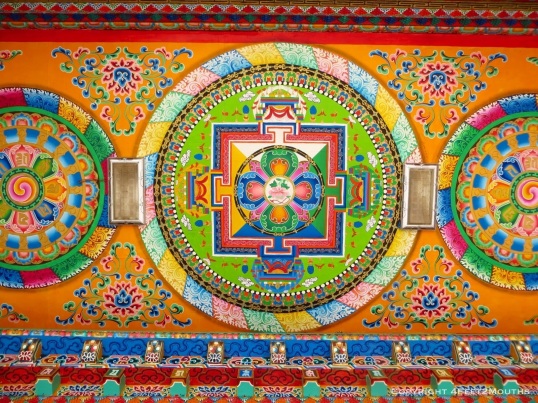 Ceiling painting on the main gate 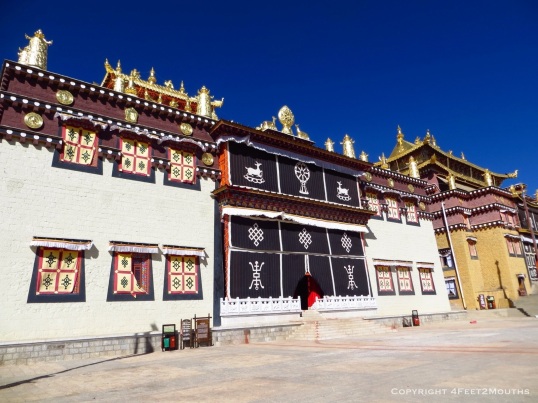 Front of one of the temples

The entrance gate gave us a taste of what we would find inside. The layers of color and patterns was so intricate yet harmonious. Each of the various buildings we visited was painted in a similar fashion which contrasted with the rather stark mud colored exteriors. 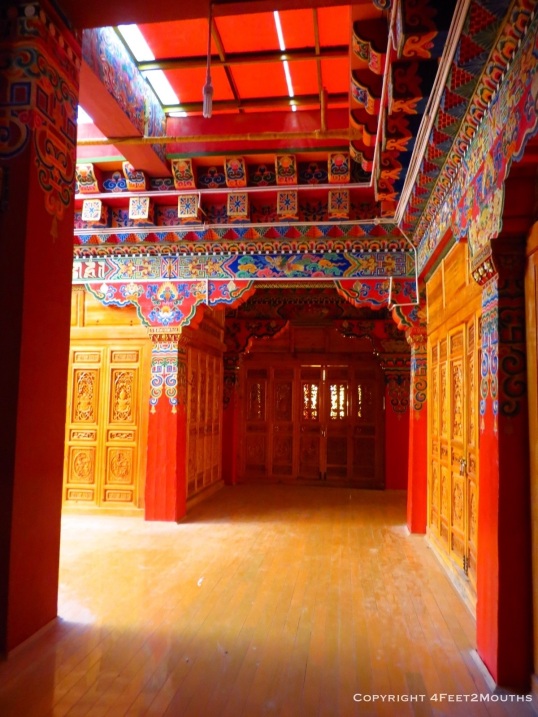 Examples of the paintings of morals and religious stories

Inside the paintings would pop with vibrancy. Many of the temples depicted the same themes. For example the stages of enlightenment metaphorically represented by a black elephant becoming white. Or the bird on top of the rabbit on top of the monkey on top of the elephant. All these have background stories I’m sure but they seemed mysterious to me. While many themes were repeated there was one shrine in particular that was unique from the others. The walls were black with neon sketches of skeletons and animals. Sadly no pictures allowed.

View from the roof 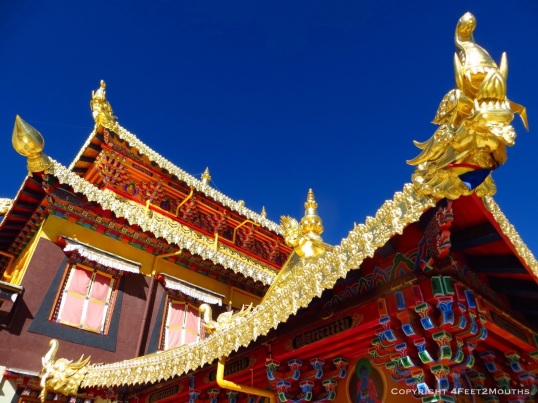 In our temple to temple meanderings we eventually found a little spot to get out onto the roof from where we could look out past the gilding and onto the city and the lake.

One more of the monastery

We did see a few monks in the temples arranging offerings, meditating or greeting people. They looked a little cold in their simple robes. Overall the cold winter weather (highs were in the low forties and of course nowhere, not even our hotel room, had true heaters) gave the monastery a feeling of austerity. 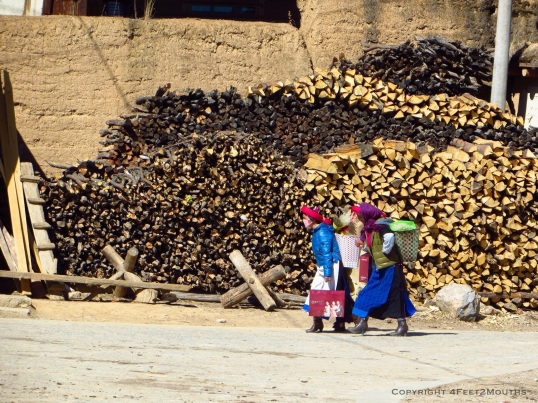 Outside the monastery walls a village had formed. We walked around, admired the heavy Tibetan style architecture, pet the yaks. It did feel a bit strange though, like I was intruding. I wonder how much money the villagers get from the high priced ticket.

Nathan with 20 layers of clothing 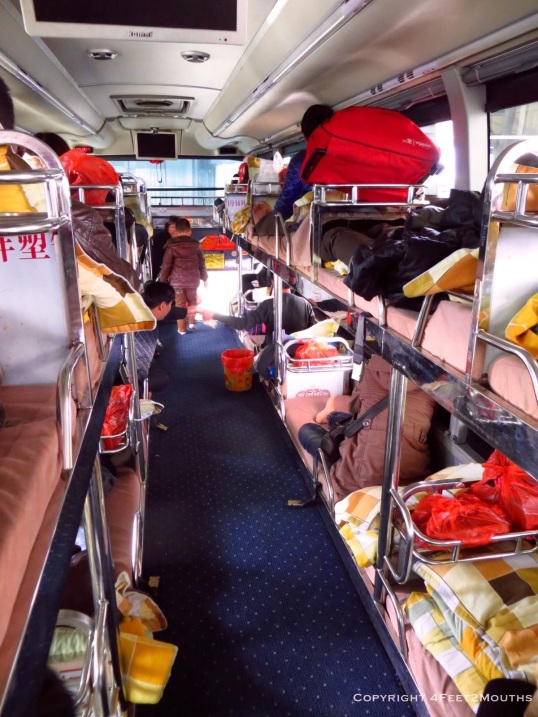 We could only handle so much cold. Nathan was wearing almost everything he had! Zhongdian was a brief but worthy interlude on our Yunnan tour. We made our way south on a long journey to warmer weather and magical rice terraces.

11 thoughts on “Finding Peace and Cold in Zhongdian (by Carmen)”