Visiting the Big Guy in Leshan (by Nathan) 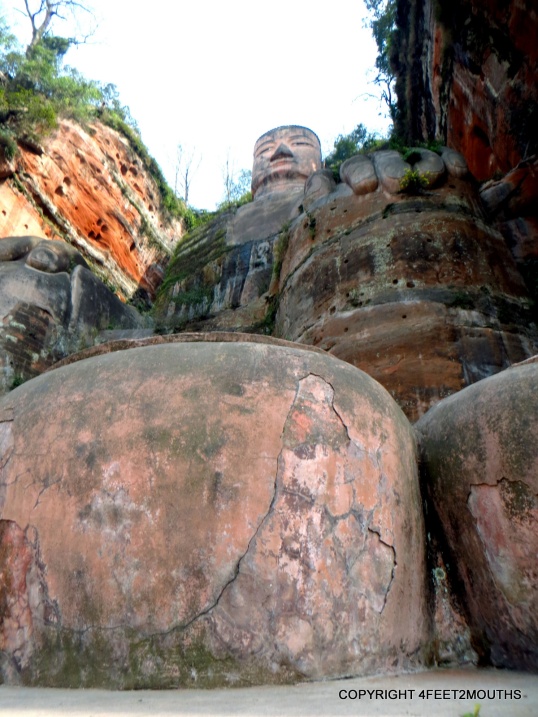 The big toe of the Big Guy

What an enormous toe!  That is what I kept thinking to myself while standing below the largest Buddha statue on earth.  The toes alone of this statue made me feel small and the towering statue made me feel miniscule.  I guess that is the whole point, the enormity of God and the frivolous creatures that we are as humans on earth.  It was very humbling to enjoy and admire such a creation as this in China. Look at what they carved from a mountain 1,300 years ago! 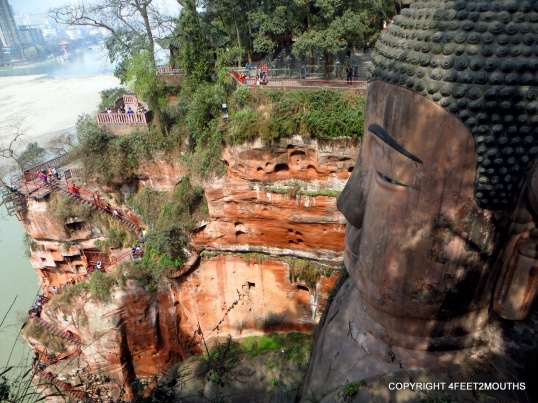 Stairway along the cliff

The Leshan Dafo is now the largest statue of Buddha on earth.  I use the word “now” because there used to be a bigger one, but it was destroyed in Afghanistan.  I am kinda liking Buddhism and its global respect for humanity versus the religious extremism that so prevalent.  The Leshan Buddha stands 222ft (70m) tall with earlobes as tall as a house.  Long earlobes are often seen throughout Asian statues as it is a sign of long life and prosperity.  We climbed several hundred stairs along the cliff to reach the bottom.  At the base, Buddha sits serenely staring into the horizon and into the souls of all those admiring his grandeur. 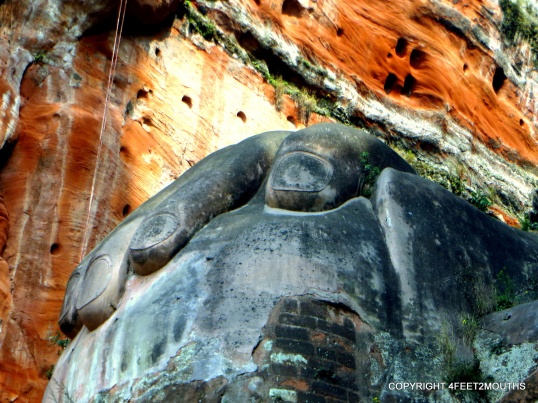 Carved hand on the knee

We had a particular rewarding experience with a Tibetan family that had made a pilgrimage here from their homeland somewhere in western China.  They were so courteous and friendly in their “hellos” to us that we were at first taken aback; that’s not our typical reception in China. There is still a clear divide among Tibetan and Han Chinese. While many of the Chinese visitors would do a cursory incense lighting they would then proceed to take pictures of themselves from all angles in front of the Buddha. Many of these visitors dressed in their heels and glamorous clothes trying their best to show off. The Tibetan family, on the other hand, was dressed in thick robes and animal furs that were clearly better suited for a freezing winters than the warm temperatures they were feeling in Leshan.  They did their best to shed clothes, but their main focus was to pray to Buddha. They lit candles and meditated.  It was nice to see people that saw more of this statue than its tourism. I secretly wished that they would invite me for some yak butter tea, but I did not know how to get that across :) 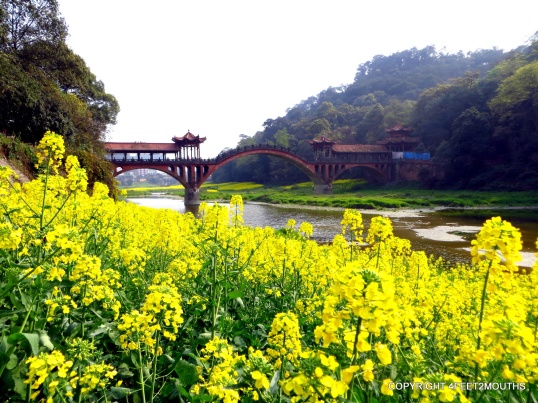 We made our way into Leshan on a bus from Zigong.  The plan was for a day trip to visit the “big guy” and the surrounding temples and then hop on another bus to where we would stay the night in Emeishan.  With great luck, everything went as planned and we were able to see everything, including some beautiful fields of yellow flowers, arched bridges, temples and painted rock caves.  This would not be the end of our spiritual journey through China; it was time to put our pilgrimage shoes back on…

2 thoughts on “Visiting the Big Guy in Leshan (by Nathan)”