Archive for the tag “shanghai”

The Best Thing I Ever Ate (by Carmen) 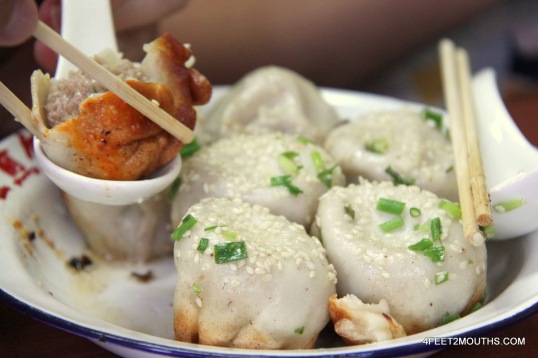 That’s it. In the picture. The best thing I ever ate. Specifically, it’s a fried soup dumpling (aka 生煎包 or shengjianbao) from Yang’s Fry Dumpling in Shanghai. The memory of that first bite into the crisp, sesame-scented skin through to the juicy interior. Savoring each sip of the piping hot broth. Even now my mouth waters.

But it was about more than the dumpling. It was the moment, the trip, the city, the people, the cafe, the florescent lighting, the finding of the dumplings themselves – everything contributes to the experience of a true food find. So here is my ode to the holy grail of dumplings, encountered on a rainy afternoon and Huanghe Road in July 2009. 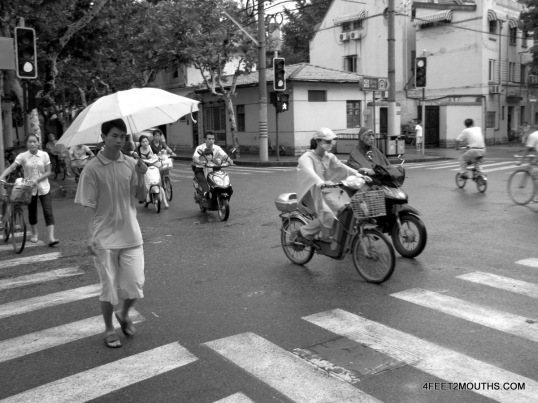 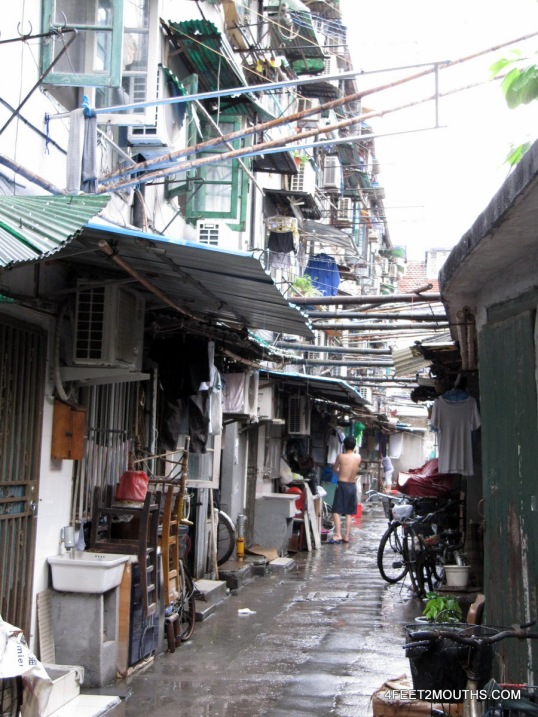 Alleyway in the French Quarter

It was Nathan and my first taste of travel in Asia. The weeks before I started grad school we criss-crossed the continent for 6 weeks – Hong Kong, Malaysia, Singapore, Japan, and China. It was a culinary awakening in many ways. The flavors were fresher, brighter, stronger, spicier, sweeter, just overall more intense than I could have imagined. I was loving everything I ate, becoming intoxicated on everything from gula melaka (a rich malaysian palm sugar) to Japanese bento boxes. Our last stop on the itinerary was Shanghai. My parents, who had joined in part of the journey, Nathan and I had lingered in the old French Quarter, ate amazing bbq eel and observed the crazy fast high-rise construction in Putong. 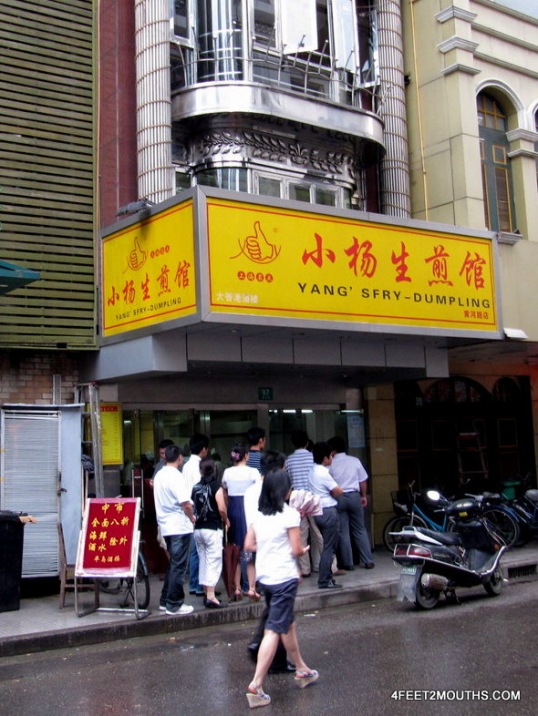 But it was in our first afternoon that we arrived at Yang’s. We were looking for a noodle restaurant recommended by the guidebook and had no luck finding it (this happens a loooot). As we gave up, I looked across the narrow street and saw a familiar yellow sign advertising fry dumplings. It took me a second to realize that I had seen it on TV, Anthony Bourdain’s No Reservations to be exact. Nathan and I had watched it to get excited for the new sights, sounds and tastes we were about to encounter. Everything came together at the right moment otherwise I would likely have passed what looked like every other hole in the wall cafe right up. 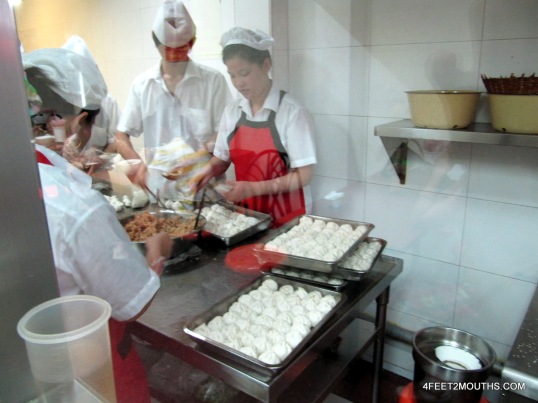 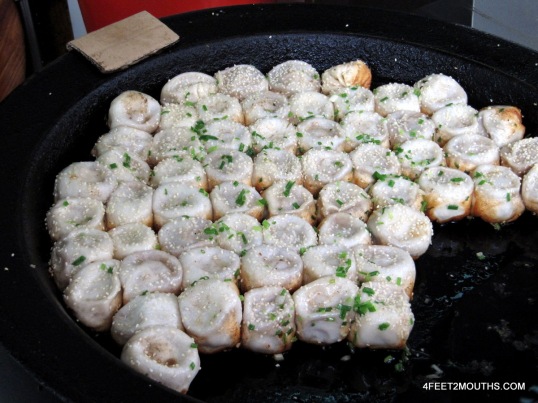 The bowl of plump dumplings was plunked down in front of us and I gathered my dumpling with my soup spoon. As I took my first bite into the skin, I was careful not to lose the precious broth inside. From the second the flavors hit my taste buds I was floored. A beautiful depth of textures and flavors exploded in my mouth. We all had a collective moment of silence around the table. I’ve commemorated the event with a picture of these glorious dumplings on my living room wall. 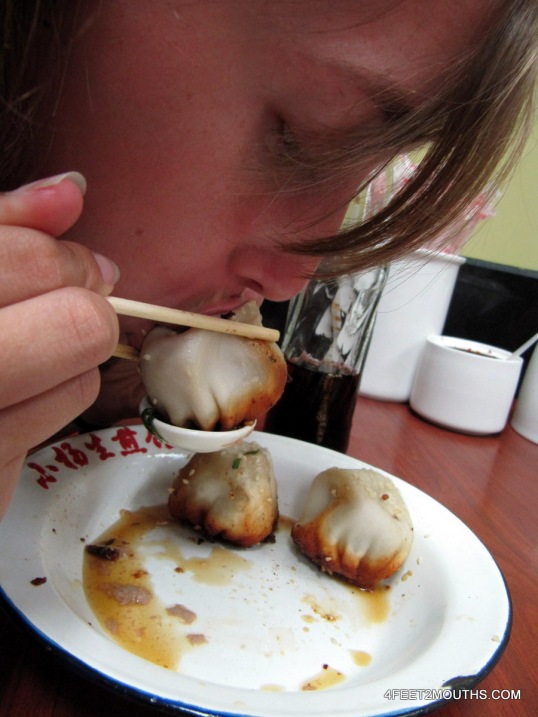 My mom always said I’d find true love when I least expected it. She was right. But I didn’t realize her sage words applied to culinary relationships as well. Love at first bite. This love is not only because it tasted phenomenally good, but also because it provided a capstone to the deliciousness I had encountered throughout Asia. This dish inspired me to try more, explore more, travel more and find that next bite to take me out of this world. In short, Yang’s inspired me to dream big eventually leading to the Big Trip of 2012-2013. What power a simple dumpling can have! 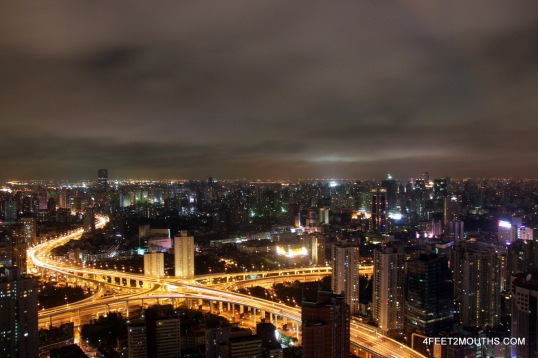 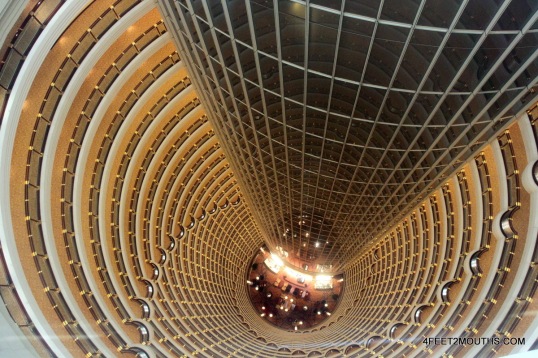 Looking down the core of the Shanghai Jin Mao Tower

Shanghai has been on my mind because a friend of ours moved there almost one year ago. Inspired by this blog to do more exploring, he and his wife took the plunge and moved halfway across the world – from Texas to Shanghai. We recently received a lovely email with them complete with pictures of their experiences. I’m so impressed with their adventurous spirit. So this post is dedicated to them, Tomasz and Nicola. To many more adventures – and dumplings.

Note: Yang’s Fry Dumpling is a local Shanghai chain with a few locations. I went to the one at 97 Huanghe Road, just north of People’s Square. It’s labeled 小杨生煎馆 on Google Maps as of June 2014. One friend tried to find this location and was unsuccessful, so you may want to consult the web for other locations.