Higher Learning in Condoritos (by Nathan)

Another name for this post might be “The Best And Worst Day In Condoritos.” Vacation is not all about relaxation, but frequently a memorable experience is about a little pain, fantastic views and numerous lessons learned. Visiting the Parque Nacional Quebrada de Condoritos was one of these adventures.

Our trip to the canyon containing the Andean condor breeding grounds was another two hour bus ride from Córdoba. We travelled high into the mountains and high into a thick cloud that we did not expect. Our driver was supposed to drop us off at the unmarked dirt road entrance, but he forgot. He pulled over on the side of the highway and informed us it was “really close” and that we just had to “walk around the corner.” An hour and a half later we arrived at the visitor center, time to “begin” the hike. 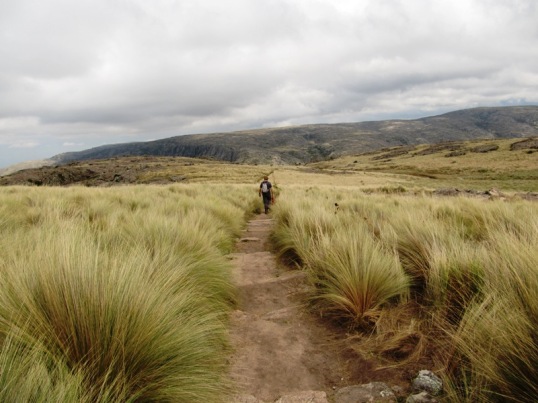 We checked our return bus schedule to Córdoba and we were off. We planned on a five hour hike that would give us plenty of time to get the 6:30 bus. 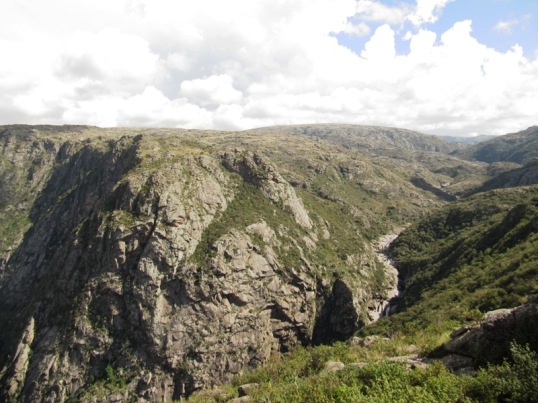 The canyon of condors was magically sensational for the eyes. We saw huge boulders, green grass and an occasional field of wispy golden grains that danced in the breeze. We sat on the cliff edge hypnotized by the souring condors gliding effortlessly into the thermal columns of the canyon. We quickly ate down our lunch of carrots, cheese and apples then cooked in the sun like two lizards on a rock. 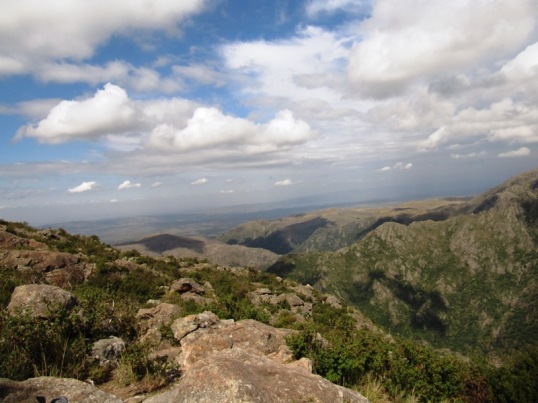 Our return hike was even more fantastic. The clouds dispersed and everything sparkled in the golden sun. The trail glistened with huge crystals of quartz and flakey mica. We climbed and descended over the hills and repeated this cycle several times on our way to the highway.

Huge condors flew overhead.  This bird has a wingspan of up to ten feet and a body the size of my thigh (it´s a big thigh). In the last dirt section of our trail a condor soured over us to better investigate. His huge wings fully spread with its white finger-like tips barely moved and his huge body hovered fifteen feet above out heads. With a gentle tilt of his wings he quickly maneuvered into the valley.

We were tired from 30km (19mi) of hiking and we plopped our throbbing bodies on the side of the road in anticipation for our bus.  An hour and a half passes and we realize that the bus is not coming. Another couple arrives loaded with camping gear and plans to hitchhike to Córdoba. Every half hour a microbus similar to the one we took to the park would fly by. We wave our hands eagerly, but we faintly remember the driver telling us that only the collectivo (big bus) would stop for us.

The sun began to set, the winds pick up and the temperature drops. Carmen and I huddle for warmth, but this does little to stop the shivering. Carmen screams out at the bus that never came, tears dropping as the freezing temperatures take their toll.

Then Carmen got a little warmer and there was hope. The back-packing group lent Carmen a hooded sweatshirt and thirty minutes later they saw my violent shivering and passed me the warmest pullover of my life that was soft and light with llama wool.

Another hour on the roadside shielding ourselves behind a concrete barrier and a third couple arrives from the dark. Jumping up and down and waving frantically the 7:30 bus does not stop for us. We attempt to hitchhike as well, but no one hesitates for six hikers and no car stops for us. There is only one more bus, one more chance. Carmen and I make plans to break into the visitor center for shelter.

The third couple fed us cookies to keep up our spirits. Then there is an idea: FIRE. Frantically we scramble to assemble the dried reeds. I was the craziest of all. I built a blazer and nearly threw myself into it to take in the heat. Our hysterical actions blinded the fact theat we could start the whole national park ablaze. Carmen pointed out that the three foot sideways windblown flames were inching their way to the dray brush.

We create a fire ring and restart the fire. Across the valley we notice a red glow, our last hope- the 8:30 bus. Our jumps and waving is even more frantic. We are desperate to get to Córdoba. It stops! Our boots stomp out the fire and we douse it with a liter of juice. Magically the bus pulls over onto the dirt shoulder and we sprint to the open doors excited to suck in the mixture of dust and exhaust. We stumble onto the dull bus and we find seats on the warm hard aisle floor. I refused to remove my layers because I enjoyed the tingle of sweat on my face that is so much better than frost in the nostrils. After three hours of waiting, we were finally warm and on our way to Córdoba.

This is not meant to scare, but more so to point out that this is traveling. The insatiable craving to explore brings about experiences good and bad. In every city there is joy and pain, frustration and delight and most of all knowledge and understanding of a culture and a place that only happens when we say “we have been there!”

Endless fields along our trail

Now, what are these lessons learned:

One thought on “Higher Learning in Condoritos (by Nathan)”