Archive for the tag “Meekong”

Monks enjoying a walk in the sun

I’m pedaling furiously, with a scooter in front and a scooter behind me. I’m on a simple wood and iron bridge with two sets of narrow planks for scooters and bicycles to use single file. The river below peeks out through gaps in the decking. As I ride, brow furrowed in concentration, it hits me. I’m in Laos, cycling across a wooden bridge with scooters and this feels somehow normal. I have now been traveling so long that the unfamiliar has become standard. The thought brought a smile to my face. 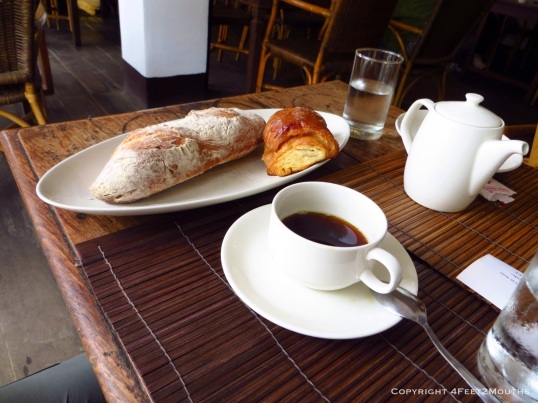 Crossing the bridge occurred on our last day in Luang Prabang but from the beginning the town offered a mix of the familiar and unfamiliar. For example, I woke up our first morning craving some comfort. We had survived a 27 hour bus journey and I wanted a reward! So we headed over to Le Cafe Ban Vat Sene for some coffee and pastries. I bit into the warm-from-the-oven pain au chocolat and realized how very long it’s been since I’ve had such a buttery, rich delicacy. Taking our time at the cafe was a wonderfully slow introduction to Luang Prabang. 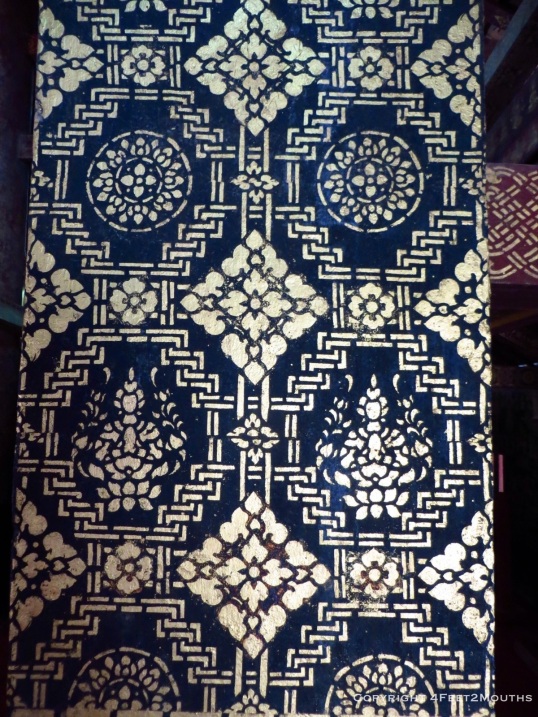 Nearby the cafe was Wat Xieng Thong. The beautiful stencil work at the wat inspired Nathan and I with decor ideas for our future home. I also loved the pretty mosaics that adorned the outer walls. In the main shrine, they had the life size figure of a wise looking monk in a meditation pose. These statues are sometimes metal and sometimes wax. The wax ones always make me look twice, thinking its an actual person.

Within the wat complex we saw many monks working on the grounds. Monks in Southeast Asia are not necessarily ordained for life. Instead, some are only participating for a few months or years to bring honor to themselves and their families. That’s partially why a significant portion of the monks are young boys.

Luang Prabang is a center of spirituality for Laos and therefore has a greater monk population. This is part of its mystique and also part of the tourist draw. One morning we awoke before sunrise to watch the morning alms procession. It is supposed to be a fulfilling experience to see people giving freely to the monks so that they may eat that day. However, it has become something of a tourist circus with big cameras being stuck in monks’ faces. But the monks handle it with grace and, hey, everyone has got to eat. 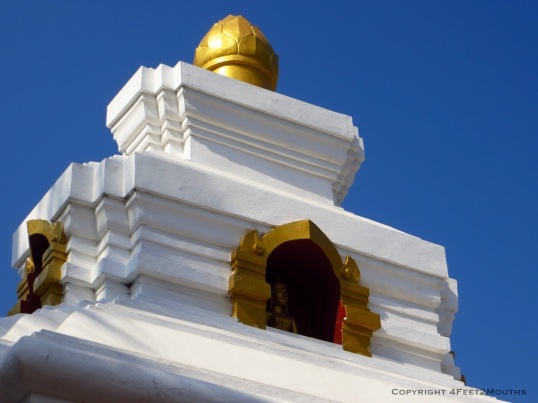 Speaking of eating, we made our way to a street stall for lunch after our wat visits. It was a simple noodle soup; not as complex as some the ones we were enjoying in Vietnam. But it was still full of comforting vegetables and a toothless cook bidding us “merci beaucoup” as we waved goodbye. 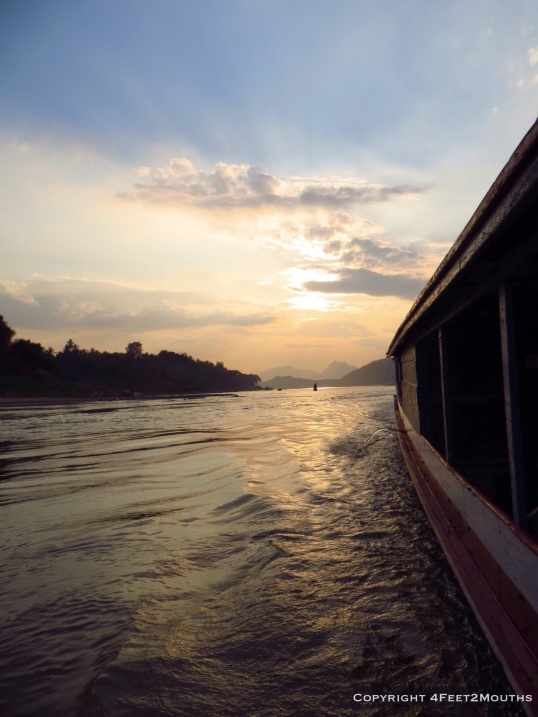 Later in the day, we were able to meet up with Julia and Jonathan again! Like us, they are fans of trying new, unfamiliar foods. Unfortunately, one of their meals did not quite agree with them. Therefore we took a nice and easy sunset cruise along the Mekong River.

The Mekong is not the only popular water body in Luang Prabang. We also visited the Kuang Si Waterfall. I had expected a pretty little waterfall but I was surprised to find such beautiful, bright turquoise waters. We used a side trail to reach the waterfall so it felt like our own little discovery…at least until another group of tourists showed up to our photo op space to take their pictures. 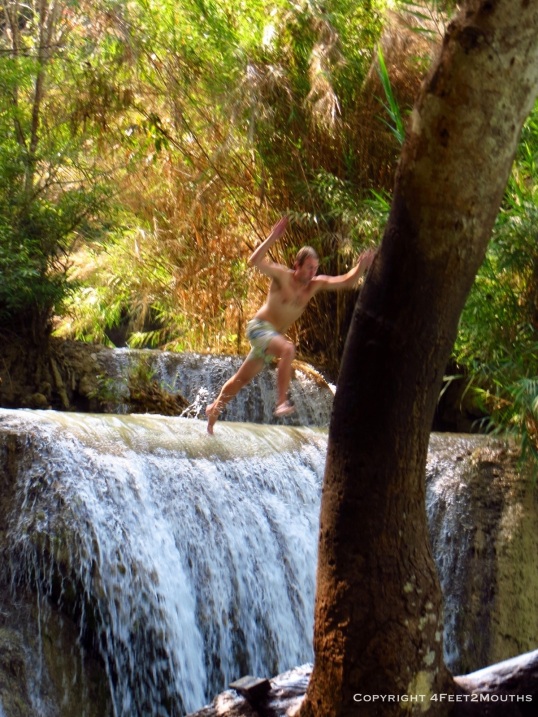 The weather was absolutely perfect. Not hot, not cold, not humid, not dry. It was such a pleasant walk as we made our way downstream. Before long we found the swimming section and within seconds Nathan was jumping into the cold water. Julia and Jonathan joined in but I was content just sticking my feet in. 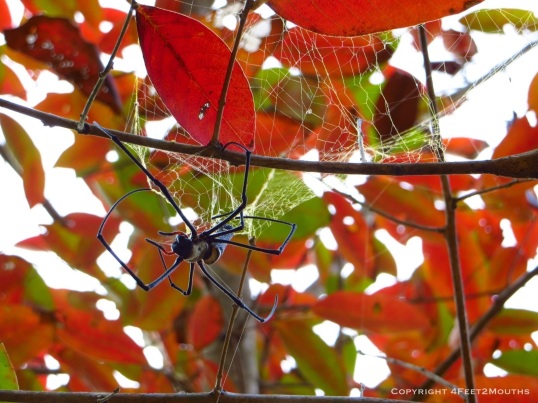 Thailand has some big spiders

We could have enjoyed the swimming hole a bit longer but there was another waterfall on our itinerary. Tad Sae Waterfall is accessed via an easy, stone path winding its way through the jungle. Or so I was told. I had stubbed my toe at the Kuang Si Waterfall and did not feel up to visiting the second one. While I recovered, Nathan, Julia and Jonathan enjoyed the natural beauty of Tad Sae.

Before we knew it, our final dinner with Julia and Jonathan was upon us. It had been awesome to visit Hoi An, Hanoi, Halong Bay and Luang Prabang with them! Together we toasted all the good times over Korean food at Big Tree Cafe. 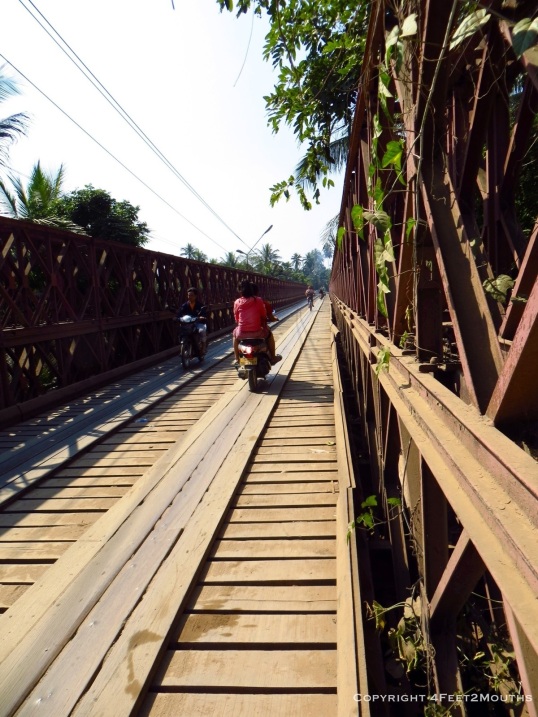 Biking with scooters on the wooden bridge

Which brings me back to the wooden bridge I mentioned earlier. Nathan and I decided to rent bikes and ride to the bus station for tickets. This took us out of the normal tourist zone pretty quickly. On our way back we noticed a smoking hot BBQ and decided to stop for lunch. We ordered what we thought was a pork chop on the grill, which turned out to be a slab of pork fat. Whoops! Not bad with some beer and tamarind hot sauce. 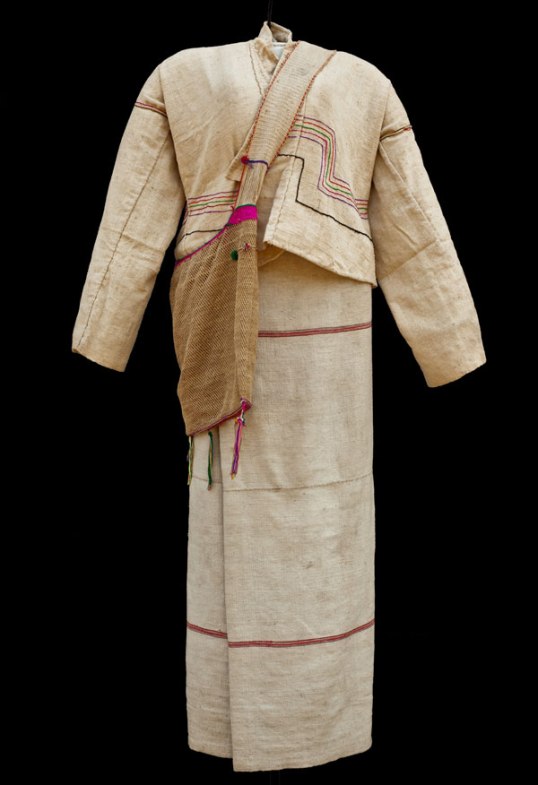 One of our last sights of Luang Prabang was the excellent Traditional Arts and Ethnology Centre which clearly outlined the various ethnic hill tribes of Laos. They each have distinct languages, customs and dress. Fortunately we were going to see some of these tribes first hand since our next stop would be a three day jungle trek to visit mountainous villages. We bid goodbye to the cosy comforts of Luang Prabang and boarded a bus to Luang Namtha.